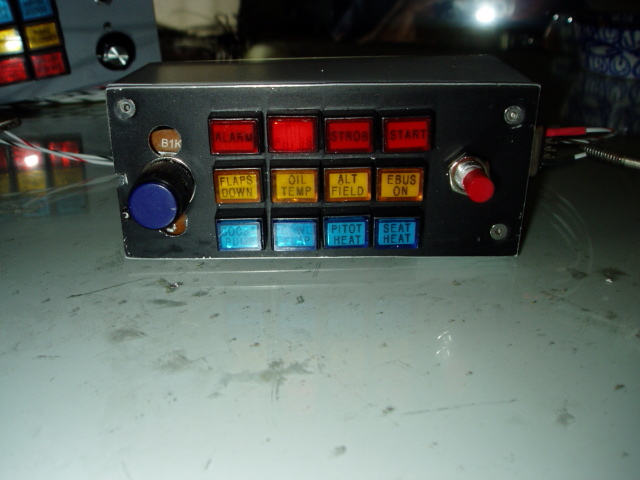 Some people call them “Idiot Lights”, lights that are on under some condition, and off when that condition is not present.  Pilots may have strong opinions on whether or not they are useful.  Many state that most annunciator functions can now be implemented through the glass panel displays that many of us are installing, and therefore an annunciator panel is just adding  unnecessary complexity.

If forgetting to turn off a fuel boost pump after takeoff, or not remembering to turn on strobe lights before starting the engine makes one an idiot, then count me in.  Our RV-7 is going to have an annunciator panel.  Exactly what conditions will be monitored is yet to be determined.

Inspired by the work of Paul Dye and others, I decided to build my own.

The idea is that in normal cruise flight at night, interior cockpit lighting should be kept to a minimum.  All annunciator lights should be off. Some lights such as low oil pressure will go on as soon as the master switch is turned on and and will be off in normal operation.  Selectable ascessories such as fuel boost pump and seat heaters will normally be off, but lit when on.  Each flight regime (pretakoff, takeoff and climb, approach and landing) may have annunciators lit; but in normal cruise all light will usually be off.

The severity of any lighted condition may be indicated by color.  Critical system failures such as low alternater output may raise red lights.  Selectable responses like essential bus on may activate yellow lights.  Other condition settings such as pitot heat on may have blue annunciator lights.

I started by making a list of potential annunciator condition messages as follows: 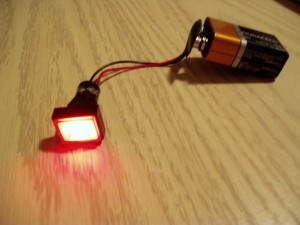 The lights in Paul Dye’s panel were 12x16mm LED rectangles that I found sourced at an east Florida vendor. They operate from three through twelve volts.

Very inexpensive, at less than a dollar each. 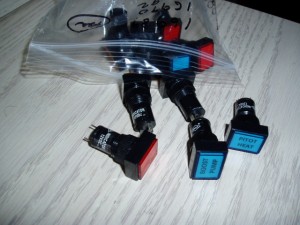 The lights were available in several colors.  As of this writing the vendor has only red and yellow in the 12x16mm size.  I was told the Chinese manufacturer is out of business and it is not known if more will be available any time soon.  Other sizes are available. 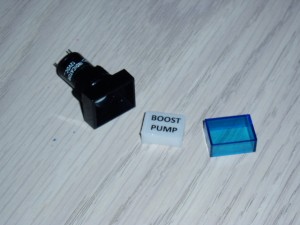 The lights consist of a colored face plate that matches the color of the LED, in this case red, yellow, or blue.  The face plate is easily pried off or reinserted into the light housing.  Behind the face plate is a white difuser plate.  I used a Brother P-Touch printer and black on clear tape to print the lables that were then stuck onto the difuser surface.

Annunciators need a method to test whether the lights remain functional.  In this case a test button is included.  They also need to be dimable for night ops.  A 1K ohm potentiometer does fine.

The circuit was modeled using iCircuit, an IOS app on my iPad.  iCircuit is great.  While modeling you can touch components on the screen and obtain instantaneous voltage and amperage readings.

The individual annunciator lights are turned on when their signal leads are grounded .  The diodes allow all lights to be grounded by the test button while isolating each signal line.

I have made PCBs in the past using a paint pen and etching the copper board in ferric chloride from Radio Shack.  This time I adapted PCB methods found on the internet.  The board layout was done using ExpressPCB, free software that has a drag and drop screen interface. 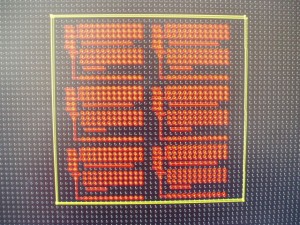 This is a wysiwyg screen shot during PCB design. 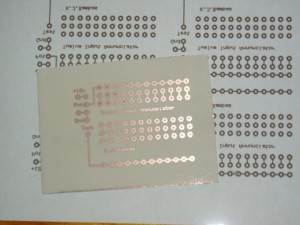 I don’t have a laser printer.  A reversed (mirror) image was selected when printing on my inkjet.  The next step was to take the mirror image copy to Staples and have it laser printed in color on glossy photo paper.  This creates an iron on transfer that puts the laser ink onto a bare PCB.

After many trials I learned to have the image recopied three to four times onto the same sheet of glossy copy.  This builds up thicker layers of toner and improves transfer quality.   Even though the source is black and white,it was copied using a color setting to lay down more toner.  Ironing sticks the ink and glossy paper to the PC board.  It is separated by soaking in water and gently peeling.  Our household clothes iron will never be the same.

The quality of the raw PC board is important.  I had much better results with a very smooth surfaced board from my old work.  New boards from a closing Radio Shack store had rougher surfaces reflecting the fiberglass mat underneath the copper.  Ink transfer was not as consistent.

Etching was done by a solution of (a) two parts household 3% peroxide, and (b) one part Home Depot muriatic acid found in the concrete cleaner section.  Forty five minutes in the solution at room temperature cleaned off the exposed copper.  An acetone wipe then removed the laser ink.  NOTE: These are not instructions on how to DIY.  Safety precautions are required beyond what is described herein.

Power, ground, and twelve signal leads are brought into the unit through mating 15 pin sub-miniature DB connectors.  I used solder tab pins rather than crimped pins.  I’m pleased with the way they went together.  Each pin has double heat shrink coverings. 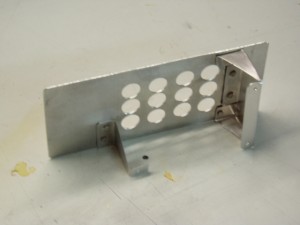 The mounting plate for the lights was laid out on 0.032 aluminum from Van’s empenage kit.  Twelve holes were drilled and stepped up to 1/2″ diameter for the lights.  The lights mount from the front and are secured by threaded plastic nuts.  The plan was to put nutplates on the back of the mounting plate that would secure the annunciator to the back of the aircraft instrument panel.  Only the two screws, lights, test button and dimmer rheostat shafts would penetrate the aircraft panel.

A support for the PCB was fabricated from 0.20″ aluminum and flush riveted to the front panel. 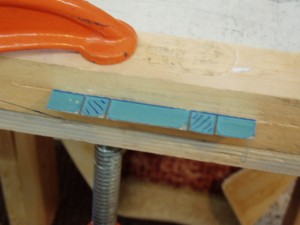 The support was clamped between wood blocks while tabs and corners were bent. 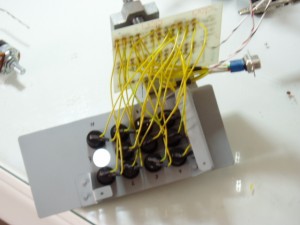 1N914 switching diodes were mounted to the PCB.  Size 24AWG tefzel wire was used for power, ground, and signal lines between the board and the lights.  These 36 wires plus three primary power, ground and test 22AWG wires made a messy rats nest between the lights and the PCB.  The finished assembly is shown below on the left. 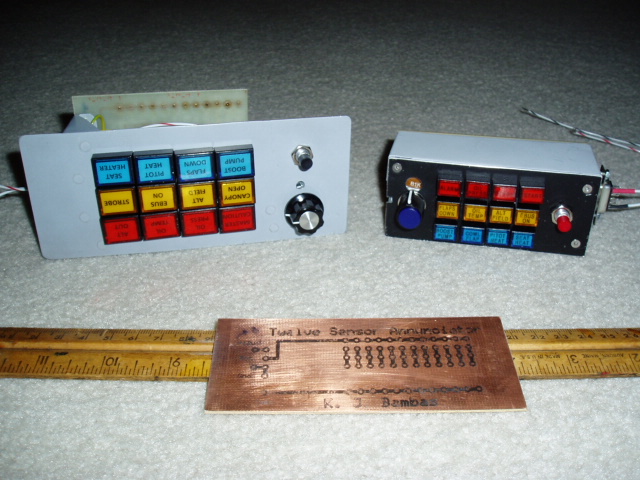 Although electrically functional, this assembly that I had intended for our RV-7 only served to illustrate my amateur soldering skills.  I decided it was acceptable only as a prototype proof of concept.

I needed to purchase more lights for the next assembly.  My lone supplier had no more blue 12×16 LEDs!  I decided to see what I could do with the next smaller size, 8x11mm and purchased enough to make three annunciators plus spares.  They are smaller in all dimensions yet functionally identical.  Applying labels to the diffusion plates was more difficult but doable.

Other changes in prototype No. 2 include:

I don’t know if No. 2 will be used in the RV-7 or if another assembly is in order.  I’m still not 100% satisfied with my soldering prowess.   Some of the motivation for building these annunciators was wanting something to do while waiting for the quickbuild wings and fuselage to be delivered and our relocation to Michigan for the summer.

Currently I’m thinking about fabricating the LEDs and  switching diodes into single units and eliminating the PCB altogether.